The Difference Between Medicated vs Non-Medicated Chick Feed What is Medicated Chick Feed?

Medicated chick starter feed is chick feed that is formulated with a medication called amprolium. This medicine can help baby chicks build their immunity to one of the most common diseases to affect chicks, coccidiosis.

Although it may sound counterintuitive, allowing some of the coccidia to live, gives the chick’s immune system practice fighting off the parasite.

No. Medicated chick feed will not treat an outbreak of coccidiosis because there is not enough Amprolium in the feed to kill the parasite. Amprolium is a “coccidiostatic,” which renders the cocci sterile versus a “coccidiocidal,” which kills the parasite.

A Closer Look at Coccidia & Coccidiosis

Coccidia is an extremely common parasite. They live in both land and water. For many animals, the parasite has little to no effect. Some species of cocci are harmless, while others can cause severe health issues and even death.  But for chickens, the parasite can wreak havoc if unchecked, even becoming fatal for some chicks and chickens.

Why Is Coccidiosis So Dangerous for Chicks?

Coccidiosis is often most harmful to chicks because they haven’t developed the antibodies to fight the parasite yet. Not only are chicks more susceptible because they don’t have the antibodies to fight cocci, but they are also raised in an environment conducive to cocci thriving. The warm environment of the brooder is ideal for the cocci parasite to proliferate if it is not controlled.

The worst cases of coccidiosis typically pop up when the chicks are 4 to 5 weeks of age, once the parasite has established itself in the chick’s gut. Additionally, this is the time when most chicks are moved outdoors. This outdoor setting can harbor the parasite.

The Great Outdoors: A Great Environment for Coccidia

While it may be tempting to avoid exposing your chicks to cocci altogether, that is impossible. As soon as your young birds experience the great outdoors, they are exposed to the various cocci parasites present in their environment. So, in order to make sure chicks aren’t affected by coccidiosis, they must build up immunity to the parasite from a young age. You can do this by helping them build a natural immunity to the parasite or through medicated feed.

Should I Feed my Chicks Medicated Feed? Medicated feed can be used as a prevention for chicks who have not been vaccinated for cocci by a breeder or hatchery.

Feeding medicated chick feed to your brood does not require a prescription from a vet.

First, medicated chick feed does not kill cocci or stop an infection once it's started. It can only be used as a preventative measure.

Some new chick owners aren’t aware that medicated feed is not 100% effective. Chicks can still become ill with coccidiosis, and many of their owners don’t realize the issue until it’s too late.

Amprolium is also only effective against coccidiosis and no other parasite.

When to Avoid Medicated Chick Feed

There are a few instances when you should definitely NOT feed your chicks medicated chick feed.

If your chicks have already been vaccinated for coccidiosis, then you should not feed them medicated chick feed.

Medicated chick starter feed can lead to a thiamine deficiency (see below for more information).

However, you don’t want to supplement with thiamine while you are feeding medicated chick feed. The Amprolium would block absorption of the thiamine, anyway.

When to Choose Non-Medicated Chick Feed

Many chick owners opt for a more natural approach to raising their flock. This often includes skipping medicated chick feed. While many larger-scale breeders lean into medicated feed due to a high number of chickens, many backyard flocks owners choose non-medicated feed with a natural immunity approach. This approach often works well and can prevent the risk of thiamine issues.

How to Encourage Chicks to Build Natural Immunity to Coccidia If chicks are raised properly in a clean, dry environment, the chicks will be able to naturally build up immunity to the parasite through gradual exposure.

Raising chicks in the spring and early summer also presents a lower risk for cocci. The parasite is not as prolific in the cooler temperatures often associated with the spring months. This allows the chicks to become exposed to the parasite in small quantities through their environment.

Make sure the brooder never has extremely wet litter in it and that it is properly sanitized after each batch of chicks. The brooder should have good ventilation (but no drafts) to allow for good air exchange within the brooder.

There should be plenty of space for the chicks, even as they grow, to prevent overcrowding in the brooder.

Short trips outside on nice days can help create controlled exposure, as can introducing clean clumps of grass or weeds to your chicks while they are in the brooder. Gradually increase the time your chicks have exposure to the outdoors as they grow.

Garlic is naturally antiparasitic and many herbs have immune-boosting properties. Adding probiotics to your brood’s feed or water can also help boost good gut flora for fighting off parasites. There are times when your brood may be at a higher risk of exposure to coccidiosis. Here are some factors that could cause a high risk for your brood to become infected by coccidiosis:

In these situations, you may consider using medicated chick feed to jump-start the antibody-building process to fight coccidiosis. Whether you choose to start your brood off on a non-medicated starter grower feed with a natural immunity approach or opt for medicated feed, providing your chicks with the best conditions increases their quality of life. Grubbly Farms offers a natural starter grower feed, filled with non-medicated ingredients that they would naturally forage for in the wild. With a natural immunity approach, you can ensure your chicks and ducklings are less apt to experience a thiamine deficiency. However, no matter your approach to your chicks’ coccidiosis protection, be sure you know the signs of a coccidiosis outbreak and be prepared to contact your vet if needed.

Providing a diet filled with the nutrients helps ensure your brood will be as strong, healthy, and ready to take on the day, every day. How to Hatch & Raise Chicks Using a Broody Hen 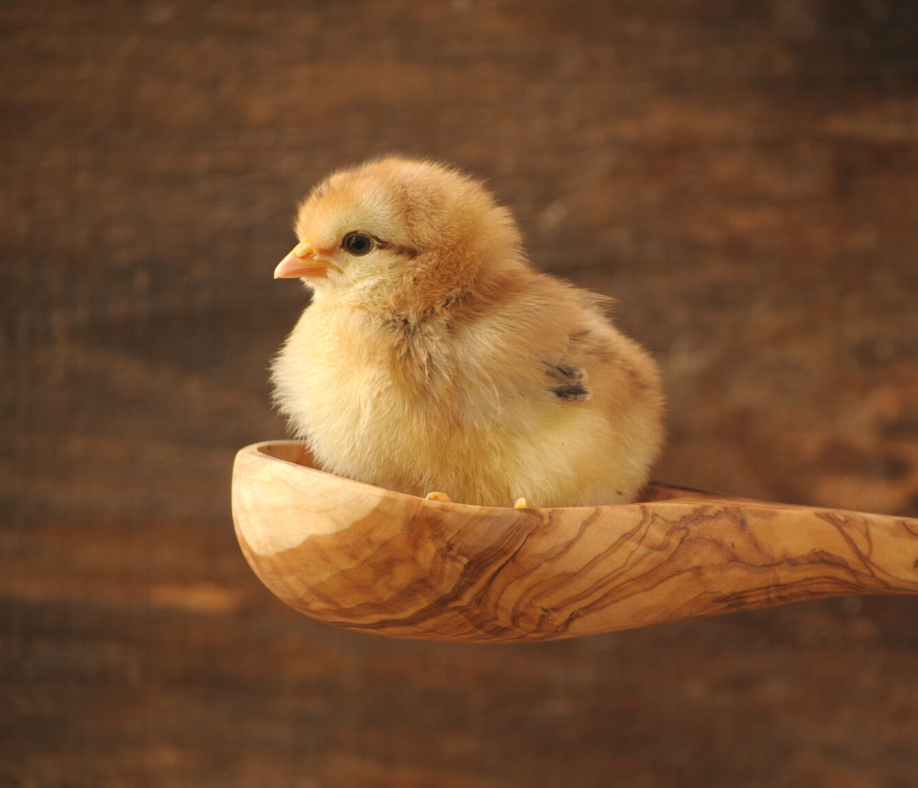